Prediction is one of the big challenges in microbiome in research. In our lakes, we’d really like to be able to warn people when a cyanobacterial bloom is going to happen, and it’s not too far-fetched to imagine that one day, clinicians may look for early indicators of disease in the human microbiome. But even when we describe changes in environmental variables to the best of our abilities, we don’t get as much predictive power as you’d expect from that information. It appears that how the current microbial community is organized may contribute to where the community is headed.

Lab member Cristina came up with a metric called “cohesion” to measure connectedness within communities, which can be used to predict community change. Now, the idea of connectedness is not new – networks are frequently used to investigate interactions between microbes. However, there are a couple inherent issues with network analysis for microbial communities. One is the “hairball” effect – there are just too many taxa to analyze at once, and you end up with a tangled mess of potential interactions. The other is relative abundance. Sequencing normalizes all samples to roughly the same depth, which makes comparisons easier, but we can’t count the absolute numbers of each taxon in the original sample. For example, if the absolute abundances of three taxa A, B, and C were 100, 100, and 100, and you can sequence 30 reads, your sequence data may look like A = 10, B = 10, and C = 10. But if those taxa go up or down in absolute abundance – say A = 100, B = 200, and C = 100, or A = 50, B = 100, and C = 50, you would get the same result in relative abundance: A = 7.5, B = 15, and C = 7.5. You can see how this can be an issue if you’re trying to determine ecological causes of change!

Cristina’s cohesion metric calculates the correlations (both negative and positive) between all pairs of taxa across a set of samples and incorporates the abundance of each taxon to assign values for positive and negative cohesion  to each sample. Because you only get two numbers per sample, this avoids the “hairball” problem of most connectivity analyses. Cristina also includes something called a “null model,” which tells you what you should expect to see if you calculate cohesion on relative abundance data with no true connectivity, so that you can compare the null model to your observed relative abundance data. And the results speak for themselves. Cristina’s negative cohesion metric predicts how quickly a community will change in Lake Mendota phytoplankton, explaining 46.5% of the variation. That may not seem like a lot, but Cristina shows that using the available 16 environmental variables combined only explains 22.9% of the variation – and cohesion requires no additional data!

The fact that the cohesion metric for negative relationships works as a predictive variable for community change shows that communities with more negative interactions (where one taxon increases in abundance while another decreases) are more likely to change in the near future. Combined with environmental variables, this increases our predictive power, and tells us something about how and why microbial communities change. To read more, check out Cristina’s full paper here.

Earlier this August, we participated in UW Trout Lake Station’s open house, an opportunity for members of the public to check out the research happening on station. We used Kaela’s microbial fuel cells (aka bog batteries) to demonstrate one strange and cool method of energy generation in the bog lakes. Some bacteria, such as the well-studied Geobacter, can perform “extracellular electron transfer,” where they can take electrons directly from electron-rich molecules when needed and transfer their excess electrons outside the cell, potentially even to other microbes. We’ve suspected that bacteria in Trout Bog could perform this process based on genes observed in our DNA time series, but needed to prove that it was actually occurring in the environment. Kaela’s fuel cells did produce a current, indicating that extracellular electron transfer is occurring in the water column of Trout Bog! (Even though it was only a few microamps, that’s still a lot of energy to a microbe).

Visitors got to check out the fuel cells at the open house, and we were interviewed by Minocqua’s Lakeland Times as part of their article on research at UW Trout Lake Station. You can check it out here!

One of the key characteristics of microbiomes is that they’re not just collections of diverse microbes doing their own things – there are complex networks of interactions between species within microbial communities, such as sharing or trading resources to benefit multiple species. Lab members Chris and Josh recently published their findings on one such interaction in the wastewater microbiome, specifically between Brocadia, which performs the anammox reaction, and Chlorobi, a green sulfur bacterium.

Both of these bacteria are cool in their own right. The story of what anammox is and how it was discovered in Brocadia is certainly worth a read (spoiler: they make rocket fuel and have traits of Eukaryotes and Archaea). Chlorobi is familiar to us from the freshwater side of the lab, where it seems to be performing more than its fair share of the metabolic reactions. But in anammox-based wastewater treatment, these two types of bacteria work together to remove ammonium from our wastewater. Even better, they do it without oxygen, one of the most expensive parts of wastewater treatment!

In this study, Chris, Josh, and our collaborators used metagenomics (sequencing all of the DNA in a sample) to piece together the genomes, and metatranscriptomics (sequencing all of the RNA in a sample) to predict which metabolic functions were performed by each community member. They found that the two most abundant and active groups, Brocadia and Chlorobi, form a “nitrite loop,” where Brocadia converts nitrite to nitrate as part of its anammox reaction, and Chlorobi recycles that nitrate back to nitrite. Additionally, Brocadia seems to be providing much of the carbon and amino acids consumed by the rest of the community in the form of extracellular proteins, while Chlorobi breaks down those proteins and makes amino acids available to the rest of the community. Interestingly, some of the bacteria found in our lab’s reactor in Madison were nearly identical to those found in a similar reactor in the Netherlands, suggesting that this relationship between Brocadia and Chlorobi is something that happens on a regular basis.

For our purposes of cleaning wastewater, Brocadia and Chlorobi seem like a perfect match! To learn more about this research, read the full paper here.

Fig. 7 from the paper

Today is the annual Trout Lake Open House! It is located at 3110 Trout Lake Station Dr, from 1-5. Stop by to learn about the research we do on station, check out some aquatic plants and fish, make limnology art, and eat Babcock ice cream!

The Microbial Observatory will be showing off our microbial fuel cells – enrichments of bog bacteria that produce electricity. Come on over to learn more!

We post about bog sampling at least once year, but with long-term time series such as ours, we haven’t shared much about results… well, today is the day! We recently published our paper “Bacterial community composition and dynamics spanning five years in freshwater bog lakes,” which details the results from our 2005-2009 bog data. Here’s a quick, illustrated summary:

A preprint is a sneak preview of a research article before it is published. While published articles are important because of peer review (the formal process of having other scientists outside of your research group evaluate your work), preprints have several other advantages. That formal review process can sometimes take months, so posting a preprint means that people can read, use, and credit your work earlier. You can also participate in an informal peer review in the comments section of your preprint, and you may get feedback from unexpected sources or people outside your field and find problems before you submit your research to a journal.

Preprints have been commonly used in other fields for awhile, but have recently become popular in biology as scientists seek to decrease review times and provide more open access to their research. Here in the McMahon Lab, we’ve embraced this wholeheartedly and have several preprints currently online!

Feedback is welcome! Click on the citations below to read our preprints. We’d love to hear your thoughts and answer questions before our research is officially published.

UW-Madison’s College of Engineering “Perspectives” magazine Spring 2017 issue has a great feature on water research faculty, including Trina! And make sure to check out the table of contents – you may spy some McMahon Lab members. 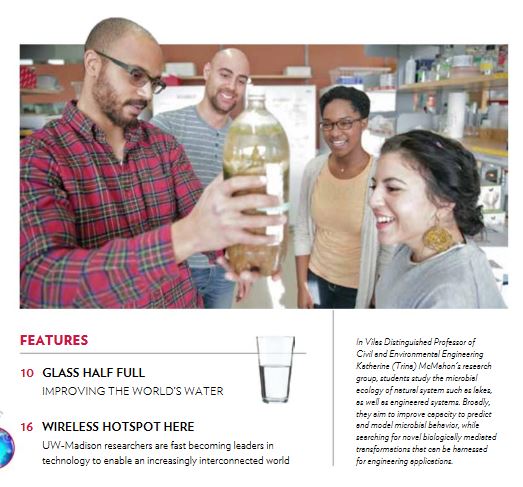 Microbes have been put to work in wastewater treatment for many years now. With their diverse range of metabolic processes and preferred living conditions, microbes are capable of removing many different types of compounds from our waste. Much of the research in the McMahon Lab focuses on polyphosphate accumulating organisms (PAOs), microbes that can take up and store phosphorus. To select for these organisms, a wastewater treatement process needs to alternate between aerobic (high oxygen) and anaerobic (low oxygen) conditions. However, this cycling can get expensive. That’s because we need to pump oxygen into the reactors, a process called “aeration.”

Wouldn’t it be great if there was a microbe that produced oxygen but only when you flipped on a switch? Look no further than photosynthesis, the process of producing sugar from sunlight. Photosynthetic bacteria and algae produce oxygen, but only when exposed to light. Combine this with phosphorus-storing bacteria, plus something to provide nitrogen from the wastewater (in this case, nitrifiers), and you’ve got a process that doesn’t need pumped oxygen!

Former lab member Ben Oyserman built just such a reactor as he was finishing up his PhD, and it’s pretty cool. For more info, check out his paper here.

Remember that name! One of the great things about UW-Madison is how much it encourages and helps people who want to start their own businesses, and lab members Pamela Camejo and Francisco Moya are the next entrepreneurs to come out of our graduate school. Their startup is called Pathogenomica, and the service they will provide is broad pathogen detection in water samples using DNA sequencing. Most tests for pathogenic bacteria are specific for single pathogens, while Pame and Pancho’s soon-to-be patented process will identify all currently known pathogenic bacteria at once. And this is just the beginning for Pathogenomica – they plan to expand into whole genome sequencing to detect new pathogens and antiobiotic resistance, as well as quantification of pathogens.

Keep an eye on this up-and-coming business out of UW-Madison and the McMahon Lab, and remember Pathogenomica if you need samples tested for pathogens in the near future!

This week, Alex wrote a guest post for the Short Stories about Long Term Ecological Research graduate student blog! You can read her post here: https://ssalterblog.wordpress.com/

Happy Holidays from the McMahon Lab!